Patrolman Cantrill was shot and killed when he stopped a man and woman who were acting suspicious in a residential area. There were no witnesses to the shooting.

Two suspects were apprehended but were never charged with his murder.

Patrolman Cantrill had only served with the Davis Police Department for 1 month, but had served in law enforcement for a total of 2 years. He was survived by his wife and infant child. 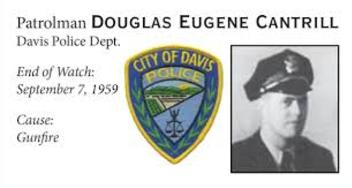 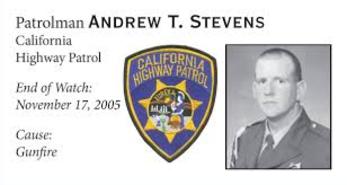 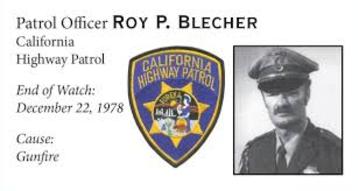 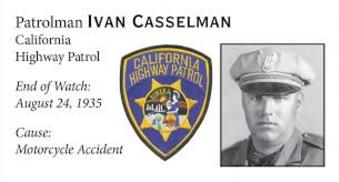 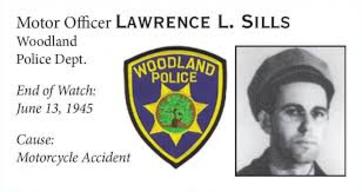 Sgt. Gary Wagers had only been in Woodland for four months, yet his dedication to his job was quickly evident. His wife, Linda, received a promotion at the California Department of Motor Vehicles, so he transferred from the Santa Ana area office after almost eight years serving that community and made the move to northern California. Soon he was known in his new office as a supervisor who was approachable and someone co-workers could trust. Sgt. Wagers, I.D. 9221, was last heard from around midnight March 15, while on a 7 p.m. - 3:45 a.m. deuce shift.

It seemed like a routine night. However, something went terribly wrong. An early-morning commuter noticed distinct skid marks on the transition road between SR 113 and I-5 and discovered Wagers' wrecked patrol car down an embankment. The driver called 911 on his cell phone, and despite quick response from officers and paramedics, Wagers was already dead. An autopsy determined that he had died instantly of massive head trauma, and there was no indication of any present medical condition.

As MAIT investigates the accident, few answers exist to explain the tragic outcome. One thing is certain, however: Sgt. Wagers was popular and was well-respected among his peers. "He was a true leader from day one," said Officer Kelly Baraga, I.D. 12428. "He was incredibly knowledgeable." Wagers promoted to sergeant in 1992 in Riverside. 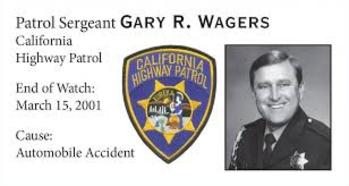 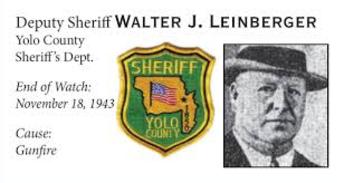 Officer Ivan Casselman was killed when his patrol motorcycle crashed into the back of a truck near Davis in Yolo County. Witnesses said Casselman was thrown fifteen feet off the roadway after striking the rear of a truck he was attempting to pass. The 33-year-old patrolman died hours later from his injuries.Officer Casselman was a seven-year member of the Yolo County Squad.

The California Highway Patrol was formed in 1929;  Officer Casselman was the 20th CHP officer killed in the line-of-duty. 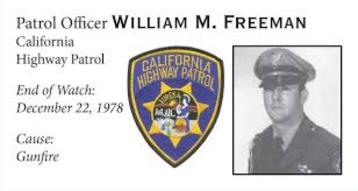 Officer James McKnight was shot and killed while serving a warrant with the Yolo County Narcotics Enforcement Team in the town of Madison Yolo County. The suspect was also shot and killed.  Officer McKnight died of his wounds on June 16, 1990.

He is survived by his wife and three children. 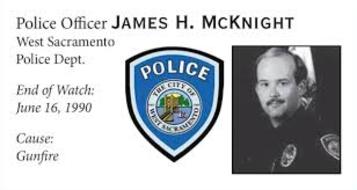 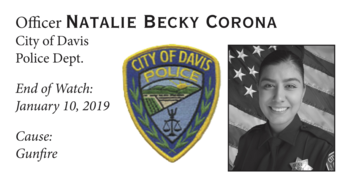 Officers Roy P. Blecher and William M. Freeman were partners, working out of the Woodland Area Office, when they were gunned down along Interstate 80 near the Yolo Causeway in West Sacramento. Investigators found signs of a struggle. Blecher was handcuffed and shot in the back of the head and Freeman had been overpowered, shot and killed. Their last radio contact was at 3:12 a.m. when they stopped a suspect for a routine traffic violation. The killer was captured, tried and convicted of the murders and sentenced to life in prison and died while in custody in 2016.  Officer Blecher, 50, was a 21-year CHP veteran and Officer Freeman, 32, was a 12-year Patrol veteran.

Officers William M. Freeman and Roy P. Blecher were partners, working out of the Woodland Area Office, when they were gunned down along Interstate 80 near the Yolo Causeway in West Sacramento. Investigators found signs of a struggle. Blecher was handcuffed and shot in the back of the head and Freeman had been overpowered, shot and killed. Their last radio contact was at 3:12 a.m. when they stopped a suspect for a routine traffic violation. The killer was captured, tried and convicted of the murders and sentenced to life in prison and died while in custody in 2016. Officer Blecher, 50, was a 21-year CHP veteran and Officer Freeman, 32, was a 12-year Patrol veteran. 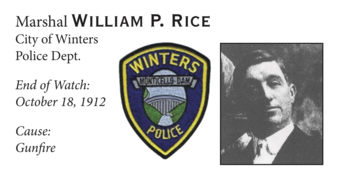 On November 18, 1943, Deputy Sheriff Walter J. Leinberger, a popular deputy in the Broderick area (now known as West Sacramento) was shot to death outside a Bryte cabin where he had gone to arrest a man for burglary.

Deputy Leinberger accompanied by his wife Zetta, was attempting to arrest 38 year old Luis “ironmouth” Balle, when Balle burst out of the cabin firing his pistol, slaying Deputy Leinberger as his wife watched.  Mrs. Leinberger, who had never fired a gun before, took her husband’s weapon and fired six times at the gunman.  She thought she missed him, as he was able to escape, but it was later discovered that she wounded him twice in the arm.

In less than twenty-four hours authorities caught up with Balle.  During a shoot out with the lawman, Balle sustained bullet wounds that later proved fatal.

Ralph W. Bonetti, then a Folsom Prison guard and a close friend of the slain deputy, was among the officers who finally caught up with Balle.   Bonetti was later hired as a deputy by Yolo County Sheriff Forrest Monroe, and in 1952 was elected judge of the Washington Judicial District Court in Easter Yolo County.

Deputy Leinberger's son William, who was eleven years old at the time of his father’s death, joined the Yolo County Sheriff’s Department in September 1956 and retired as a sergeant in 1984.

​Motor Officer Sills died from injuries received in a motorcycle accident while pursuing a suspect vehicle. He hit a patch of loose gravel and lost control of his motorcycle. Hospitalized as a result of the injuries he sustained, he passed away on June 13th.

Officer Sills was born in College City and he graduated from Yuba College in Marysville before joining the Woodland Police Department.

Officer Sills was survived by his wife and two daughters. 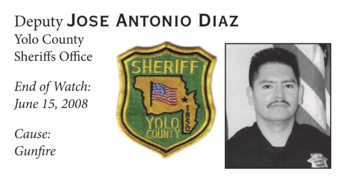 Police Officer Natalie Corona was shot and killed after responding to a report of a three-car vehicle crash near the intersection of 5th and D streets.

As Officer Corona was conducting an investigation at the collision scene, a person not involved with the crash rode up to the scene on a bicycle. As Officer Corona spoke to one of the persons involved in the crash the man then walked up to her and opened fire without warning, striking her. He shot her several more times after she fell to the ground before shooting randomly at others bystanders and vehicles.

The subject fled into a nearby home. As responding officers searched for him he emerged from the home wearing body armor, yelled at the officers, and then re-entered the home. He committed suicide moments later.

Officer Corona was transported to UC Davis Medical Center, where she died from her wounds.

Officer Corona started her career with the Davis Police Department in 2016 as a part-time volunteer Community Service Officer. In 2018 she attended the police academy, graduating in July 2018. She completed her field training three weeks prior to the incident. She is survived by her parents. Her father had recently retired from the Colusa County Sheriff's Office.

Deputy Tony Diaz was shot and killed while making a traffic stop near the intersection of County Road 5 and County Road 99W at approximately 9:30 pm.

After a five-minute high speed pursuit, the suspect exited his vehicle and opened fire on Deputy Diaz, penetrating his vest, striking him in the shoulder.

Despite his wound, Deputy Diaz was able to call for assistance.  He was transported to a local hospital where he succumbed to his injuries.

The suspect, who fled on foot after abandoning his infant in his car, was apprehended a short time later.  On October 4, 2011, the subject was convicted of multiple charges, including murder of a peace officer. The jury recommended he receive the death penalty and in February 2012 the presiding judge subsequently upheld the sentence.

Deputy Diaz had served with the Yolo County Sheriff's Department for four years.  He is survived by his three children.

Officer Stevens, a commercial vehicle inspector, had made a traffic stop near the intersection of County Road 96 at Highway 16.  He approached the vehicle and greeted the driver, when he was shot and instantly killed. A bystander who witnessed the incident used Officer Stevens' police radio to call for assistance.

The suspect fled the scene, but he and a female accomplice who attempted to hide him were arrested early the next morning by members of the Placer County Sheriff's Department. Two male suspects were later convicted of first degree murder for Officer Stevens' death.

Further investigation revealed that the suspect had been hired as a hit-man to murder another man, completely unrelated to the traffic stop, and had been provided a handgun to use in the contract killing. The suspect used that handgun to shoot Officer Stevens when he was pulled over.

Officer Stevens had served with the California Highway Patrol for 13 years, and was assigned to the Valley Division. He is survived by his wife.